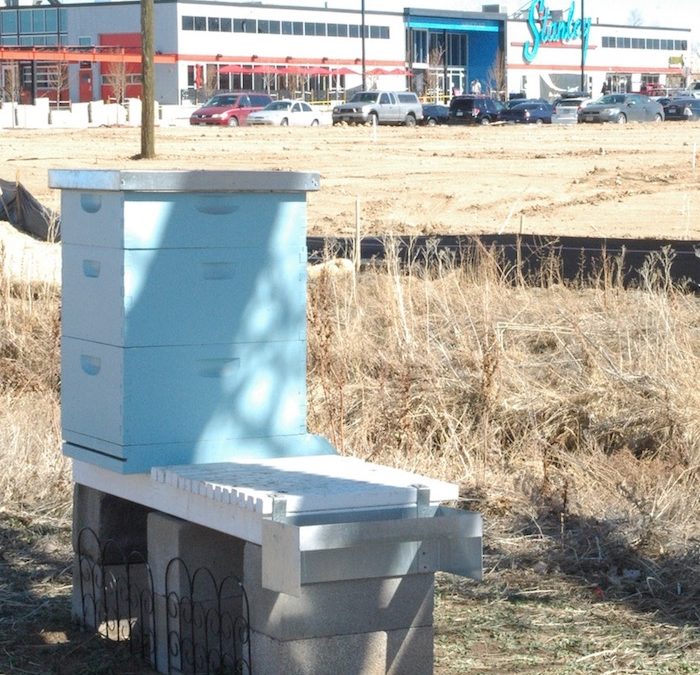 Why bees? Jeff, co-owner of Sazza, was recently asked this question when discussing a move of the company’s hive and the importance of keeping them as part of the Sazza project.

“Our hope is to have a majority locally-sourced and house-made crust with our Ancient Grain,” was the response. “We use grains that we mill in-house and a bit of honey. If we could use honey from our own hive, it would be the best possible scenario.”

April is swarm season. It is the ideal time of year when bees roam, looking for a place to settle in and build a hive. If an established hive can live through the winter, April is also the time when keepers begin supplementing their food supply. Flowers are slowly waking up with Spring and bees will take all the pollen and nectar they can find.

As the sun sets, in my gloved hand is a small pair of pliers. Admittedly, not the best tool for the job. After a few failed attempts at lifting the heavy, honey-filled frame, I pause, heart racing and ‘lean in’.

It had been less than a week since the bees’ attempt to protect their broken hive caused them to strike at me. My assistant and I endured nearly 10 piercing, fiery stings apiece before deciding we had not properly prepared for the job.

Now, working solo, each drop from the pliers’ grip and jostling of the frame caused a kerfuffle within the hive. They knew I was up to something. I just kept telling them, ‘I am here to help; this new box will keep you safe.’

In facing down the possibility of pain, I had to tell myself the same thing, multiple times.

One box of the hive had been damaged when it was knocked over and was now exposing the bees to predators. Without fixing it, it was difficult for me to rest, confident they would have the best chance to thrive into spring. My goal was to move all their frames, sticking with the same format, into a new, solid box, reduce the entrance to the hive, and leave them bee for at least a week.

The following, and others written in bold, is an excerpt from our garden diary.

Beehive is moved from the City Park neighborhood, early in the morning (7 a.m.) to south end of garden on Stanley Marketplace Campus under a tree, by Jeff Rogoff, Sarah Hinckley, and Doug Miller, a brave volunteer.

We chose the coolest morning during a warm, spring spell to transport the dormant hive to their new spot. Bees become active with the rise of the sun and heat it brings. If the temperature through the day does not rise above 50 degrees, they are less likely to venture out. It seemed like a good time to move the girls as the temperature hovered around 45.

As Sazza gears up to open their second restaurant at the Stanley Marketplace in Aurora, a half-acre plot chosen as a complement to the business, sits roughshod across the river waiting to be cultivated. Sazza, along with several other organizations, are slated to use the area, designated as open space, for gardening.

Our half-acre runs alongside the Westerly Creek between two well-established trees. One, which sits on the south corner of the plot just above the river bank, now serves as slight shelter to the hive.

Bees not only like water, they need a constant supply to weather the seasons and keep the hive humming. Near the river, under the subtle shelter of the large tree, the bees would have some of the elements they needed to stay strong.

This was the second or third attempt at wintering a hive by Jennifer Hayes, co-owner of Sazza, at their home in the City Park area of downtown Denver. When the house went on the market, the bees were also in need of a new home base.

We all had our fingers crossed that a move across town wouldn’t negatively affect their future.

(March 9, 2017) Two days after the hive was successfully moved, I checked in to see how the bees were adjusting. It was a warm day, nearing 70 degrees. Bees, buzzing excitedly about, were out mapping their new neighborhood. Encouragingly active for a hive that had been well sheltered in a fenced backyard, with a surrounding chicken coop, and now stood in a wide-open field.

Developer of The Stanley Marketplace, Mark Shaker, notices the beehive has been knocked over and notifies Jeff.

Photos of the hive show all three boxes, known as supers, knocked to the ground from the bench on which the hive was perched. The base is somehow sitting upright in front of the hive. The second super is on its side with frames hanging out haphazardly. The third is upended, the top to the hive protecting it from lying directly on the ground.

Bees are buzzing about by mid-day, likely having been startled during the evening from a sleep and taken the morning trying to adjust to their mangled home. In the side-laying, middle box is the largest concentration of bees, at least a thousand strong, if I had to guess. There is no telling if the queen is still with the hive. If she is, this area where most of the bees are concentrated, is where she is most likely to be.

First attempt to put hive back together by Sarah and Jeff leads to an attack and several stings for both. Each had beekeeping gear on their top half and were wearing shorts… duh.

Second attempt at sunset, with more body coverage and supportive gear – smoker and sugar water spray – led to calmer, more successful rejoining of the hive. No stings for either human.

Second super is broken at the top and juts outward from its impact on the ground. This creates small openings into the hive from each side of the damaged box.

Unfortunately, this is the kind of opportunity that brings around predators like wasps and opportunistic bees looking for a new home.

Sarah and Jeff put a 4 x 4 foot thin board at rear of hive, a slatted snow fence around western perimeter. A meager attempt to give them temporary protection from larger predators.

Well, bees are very important to our ecosystem, a blooming garden and our basic survival. When Sazza is ready to cultivate the half-acre plot in the open space of Stanley Marketplace, the bees will be well established, barring any more harassment.

A recent visit to the hive, following our latest cold snap and snow, showed busy bees. Many were returning with pollen sacs full, gathered from the spring bloom of dandelions and daffodils.

If you can get past the fear of a sting, and lean in to the miracle of honey bees and how essential they are to our survival, you may find yourself falling. Falling deeply in curious-love. A love filled with curiosity and intrigue to learn more about how to keep them healthy and happy, which keeps all of us thriving.